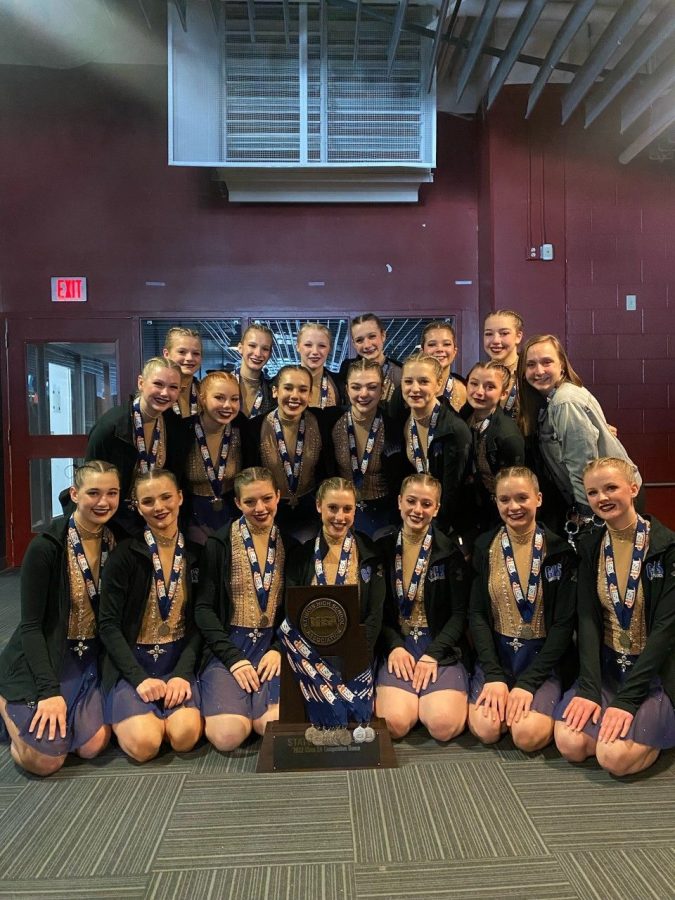 From January 28th  – 29th  the Geneva Varsity Dance Team set off to compete at their most important competition of the year: State. The girls trained all season for just the two quick minutes they get to show off their dance on the big floor in front of hundreds of people.

The team had two amazing dances; one was jazz and the other was lyrical. Both placed at every competition, but the lyrical number “Super Market Flowers” was undefeated all season and was the dance the team chose to take to state.

“Super Market Flowers” was a special dance and was perfected to perform on the state floor. The dance was made for Dance Coach Amy Vanwagenen’s mom who died the year prior to Covid. The girls poured their hearts out on the floor for the dance that was for their moms and their coach’s mom.

The process of going state was very exciting and nerve racking for the team. There were many emotions that they were all feeling because it was something the team waited months for.

“Leading up to state, I was more excited than any other emotion,” Coach of the Geneva Dance team Amy VanWagenen said.  “Of course, there were nerves too, but the excitement far outweighed the nervousness. The team was definitely ready to go and I was just thrilled that we were able to go back in person and so many girls would get to experience the magic of state for the first time.”

There are many traditions celebrated and many activities the girls get to experience which makes leaving for state even better.

“Before we leave for state, we do a state send off after school where we receive a bag of treats and gifts from all the moms, and we trade off blankets with our pom pals that we made for each other,” Senior  Lilly Japlon said. “On the night before prelims, we go to Biaggis for a fancy Italian dinner. Also, seniors get to go look at the arena the day before we compete with coach. It is cool to see the arena empty and in the process of being set up.”

The team will remember these traditions forever and will forever remember how fun state really is. The girls performed in the big arena and their parents, friends, family and many other people watched them do their thing. The girls left it all on the floor and won 2nd place where they celebrated after receiving the big state runner up trophy.

Everyone was proud for what the team accomplished and how hard they worked. The dancers were ecstatic as they held the trophy for many pictures with the trophy.

“I feel very proud and fulfilled about second at state this year!” Vanwagenen said. “It is a huge accomplishment to get on the podium and I feel like the girls hard work was very rewarded, although winning and placing well aren’t everything it is nice to have the affirmation that your work and dedication are appreciated!”

“Dancing on the state floor was definitely different than I imagined,” Freshman Larkin Cohrs said. “I couldn’t stop asking myself how crazy it was that I was actually at state, the amount of cheering and love from the audience and stands was amazing.”

“I was sad because it feels natural that we would have one more year getting to dance on the state floor after last year,” Japlon said. “However, I am thrilled, proud, and somewhat relieved that this was my last time performing on the state floor, despite state being so stressful at times, it is a great experience that most teams don’t get to have. We are so lucky to be able to achieve all that we have, and I’m proud leaving an impact through leadership as well as achievements.”

The dance team accomplished a lot this year and had an amazing season. State was a great journey for the team and has shown the girls that hard work does pay off and allowed the girls to have fun but work hard at the same time. Everyone is proud for what they did and they will continue their legacy of bringing home state trophies next year, and many more years to come.