GHS Uniting Through the Arts 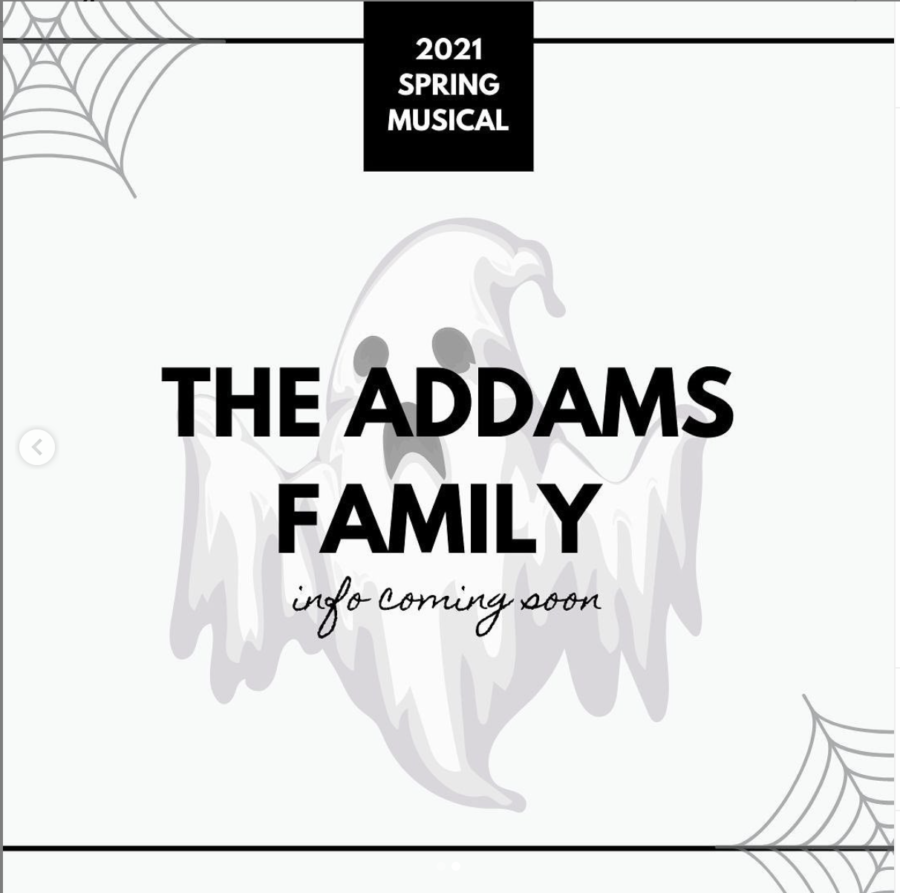 COVID-19 has banished many activities to the shadows through worldwide shutdowns, one of the most notable being Broadway. Despite this, the Geneva High School Theatre Program is determined to put on a production. Through choreographed dance numbers, songs, and comedic relief, GHS will bring the stage back to light in Addams Family the musical.

When Geneva High School drama teacher and co-director of this year’s musical, Miss Kate Woodruff, brought the proposition of an in-person musical to the administration, she was overwhelmed by the response.

“The administration was very supportive in our efforts to put on a show. We had meetings in the fall to discuss the logistics of putting together a musical with administration. After this, the directors would meet to discuss multiple options for performance, recording, and scheduling. It was certainly a process,” Woodruff said.

But the hard part was just beginning. Now came the time to organize the semantics of hosting a COVID-friendly musical.

“Students will wear masks during rehearsals and performances. Each student is given their own microphone, to prevent the spreading of germs from sharing,” Woodruff said.

With the details somewhat finalized, the casting process began. For the Legally Blonde production during the 2019-2020 school year, the cast was around 80 people. This year would have to be stopped at 20.

“This year, we had to put a cap on the total number of students cast. If you think about the number of students involved, from pit orchestra members to Tech Crew, we had to work with the other directors to ensure that everyone had an opportunity to participate safely and successfully. It was definitely the hardest part so far, as we had so many talented students come out to audition,” Woodruff said.

But the directors were not the only ones forced to function under new restrictions. Geneva High School sophomore, Becca Spezzano, aware her first official high school musical experience would look different, became motivated to receive a spot.

“No, they [COVID restrictions] didn’t really deter me because I really like musical theatre. I knew I was going to do it if there was a musical, but I wasn’t sure if there was going to be one,” Spezzano said. Although Becca had a positive outlook on these restrictions, many students did not feel the same way.

“The turnout for auditions was about 50% of our usual size of auditions. Many students have taken on jobs, are balancing hybrid scheduling, or just not feeling ready to participate in group activities yet, which we understand. I’ve worked the past 4 years to build up a large theatre program, so while it is disheartening, I understand the expectations of this year are different than prior,” Woodruff said.

While reminiscing on her previous years musical experience, senior Ella Kobylecky, playing Morticia Addams, quickly had to adapt to the new way of rehearsing.

“When it comes to performing with masks, it can be quite challenging. You basically have to retrain your mind to work with only using your eyes and eyebrows to show emotion and you have to breathe differently in order to still have proper breath support. Even through these challenges though, I am grateful we get to perform at all,” Kobylecky said.

Although both Spezzano and Kobylecky have maintained positivity throughout the recent Broadway shutdown, Ella reflects on her change of attitude toward the arts.

“My attitude towards the arts has changed significantly over the past year. Fans of musical theatre across the world came together and continued to make music even through these extremely challenging times, and it truly showed me how connected we all are. Musical theatre allows for constant creativity and is a fantastic outlet for people to come and be accepted no matter who they are or want to be, it’s one giant family!” Kobylecky said.

Taking their new attitudes to the stage, Spezzano and Kobylecky see the success of the final production with different perspectives.

Having previously experienced a Geneva High School Theatre Production, Kobylecky is determined to make the most out of this year.

“Through the sacrifices already made, I am quite confident that we can put on a successful COVID-friendly show. Although it is extremely disappointing to not have an audience and to have to perform with masks, I know that the Addams Family cast will continue to make the best of it and put on an outstanding production just like years before,” Kobylecky said.

Although rumors have been circulating through the Broadway arena, Ms. Woodruff addresses the possibility of hosting an audience here at Geneva.

“At this point in time, no. However, the CDC and state of Illinois change their limitations frequently. We remain optimistic that if the number of patrons per gathering might be raised so we can have a very small audience of family members. We still plan to record and distribute the musical virtually regardless,” Woodruff said.

Despite the seemingly impossible circumstances to put on a COVID friendly musical, the students and staff of Geneva High School consistently show their dedication to the theatre program. The cast will continue to rehearse in hopes of a mid-May performance. Through this laughable, coming-of-age musical, Geneva High School will not only touch the hearts of the audience, but bring GHS together to prove our undeniable love for the arts.