Coronavirus Now a Pandemic as the World Feels the Effects 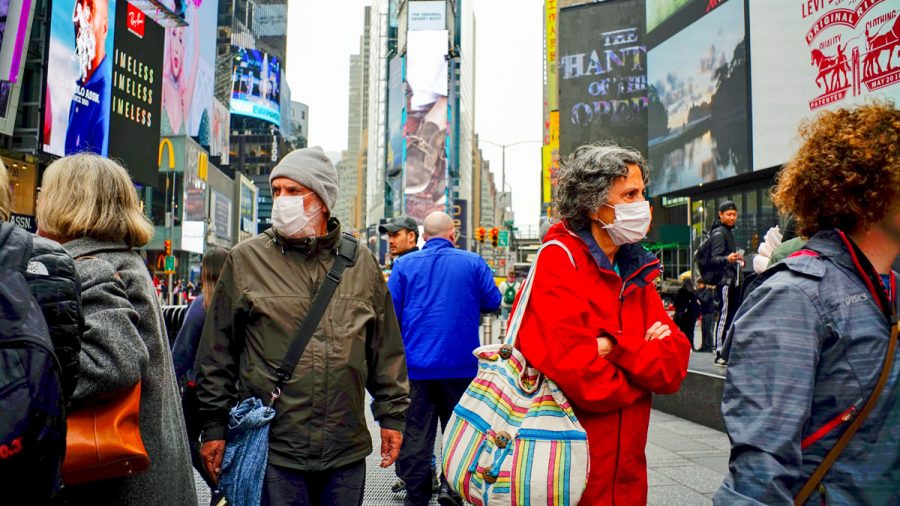 Closed schools, cancelled events, season suspensions, and travel bans are just the tip of the iceberg of the effects of COVID-19. Cases have now reached every inhabited continent, infecting some 156,000 people worldwide (at time of publishing); and that number continues to rise every day.

With more cancellations and cases appearing every day, here’s how COVID-19 is affecting our world. But first, here’s some information on what Coronavirus is, and how you can protect yourself.
What is COVID-19?
COVID-19, a type of Coronavirus, is a respiratory infection with symptoms of fever, shortness of breath, and a persistant cough. Though the symptoms sound mild, for ‘higher-risk’ individuals, or the elderly and the immuno-compromised, COVID-19 can have much deadlier consequences, as it can cause pneumonia and further problems to develop.

Coronavirus spreads through droplets from people when they cough or sneeze, and has been spreading primarily through community transmission. Cases have seemed to exponentially increase every day since it was first reported, due in part to its long incubation period, which can last around 14 days. This means that patients with the virus can spread the disease before they themselves know that they have it.

While the number of cases worldwide sits at approximately 156,000 people, it’s expected that there is a much greater number of cases that are unconfirmed or unreported due to a lack of testing.
COVID-19 Deemed a Pandemic
On Wednesday, March 11th, the World Health Organization (WHO) deemed COVID-19 a pandemic due to its rapid worldwide spread. As of Saturday, 149 nations have reported cases of COVID-19, with almost 160,000 infected and nearly 5,600 deaths across the world. China, Italy, and Iran make up nearly ⅔ of the cases, with the foremost being the origin of the virus.

WHO’s Director-General Tedros Adhanom Ghebreyesus said Wednesday that the situation will only continue to worsen. In an address, Tedros stated: “This is not just a public health crisis, it is a crisis that will touch every sector — so every sector and every individual must be involved in the fight.”

While China has begun to flatline in new cases, Italy has shut down the entire country, with a mandatory quarantine for all citizens in effect. Meanwhile, the U.S. has seen a rapid increase in cases, with roughly 2,000 infected at time of publishing. New York, California, and Washington have seen the most cases in the United States, while the only state to remain at zero confirmed cases is West Virginia at time of publishing.
Travel Bans and Restrictions Begin
On Wednesday, President Trump announced a travel ban applying to 26 European Nations, as part of a plan to stop the spread of COVID-19. People traveling from the UK and Ireland were initially exempt, but were added to the ban Saturday afternoon after confirmed cases increased greatly in each country.

While international travel is being heavily restricted, President Trump has also made it known that domestic travel may be next to get restricted. He expressed at a press conference that the administration has not yet ruled out the possibility of a domestic air travel ban, however at this time nothing has been reported.
Schools Go Remote
For millions of students across the world, the school year has come to a screeching halt to stop the spread of COVID-19. From colleges to elementary schools, classes have been cancelled or moved online for varying lengths from two weeks to the rest of the semester. Many college students have been forced to move out of their dorms and return home without notice, with campuses closing to stop the spread of the virus.

So far, 16 states in the U.S. have closed all schools, including here in Illinois, where schools will be closed until March 30th, as Governor J.B. Pritzker announced Friday.
Season Suspensions
After a Utah Jazz player tested positive for COVID-19 late Wednesday evening, the NBA announced the suspension of the remainder of their season. Following suit, the NHL has suspended the rest of their season, while the MLB has suspended the start of the baseball season.

At the college level, college championship tournaments have been cancelled for all winter and spring sports. This comes after the NCAA initially ordered all March Madness games to be played with no crowds, only to reverse that decision and cancel the tournament all together. In the wake of these cancellations, the NCAA has decided to grant another year of eligibility for all senior athletes involved in a spring sport, so they can play out their senior season.

It is unknown at this time when games will begin again for professional sports.
Pres. Trump Declares National Emergency
At a press conference on Friday, President Trump declared a national emergency, which frees up $50 billion in federal resources to combat the spread of COVID-19. During the address, President Trump acknowledged COVID-19 as a domestic threat, and encouraged all Americans to band together during this difficult time, stating, “Through a very collective action and shared sacrifice, national determination, we will overcome the threat of the virus.”

It is worth noting that, at the time of publishing, three people who were at Mar-a-Lago last weekend with President Trump have tested positive for COVID-19. In light of this, President Trump underwent a test and was deemed negative for Coronavirus, as noted by his physician in a statement.
How to Protect Yourself
The single-most important way to protect yourself is to practice “social-distancing”, as recommended by the CDC, which encourages keeping a distance of at least six feet between yourself and others at all times. If using hand-sanitizer, be sure to use a type that contains at least 60% alcohol to kill the virus. Practice good hygiene and hand washing, doing the latter with warm water and soap for at least 20 seconds. Wearing masks will only help you when you’re sick, and will not stop you from getting sick, despite popular belief.

During these times of uncertainty, stay diligent with hygiene and be mindful of risking the health of yourself and others when out in public. Stay home if you feel sick, and contact a doctor if you’re showing any symptoms.