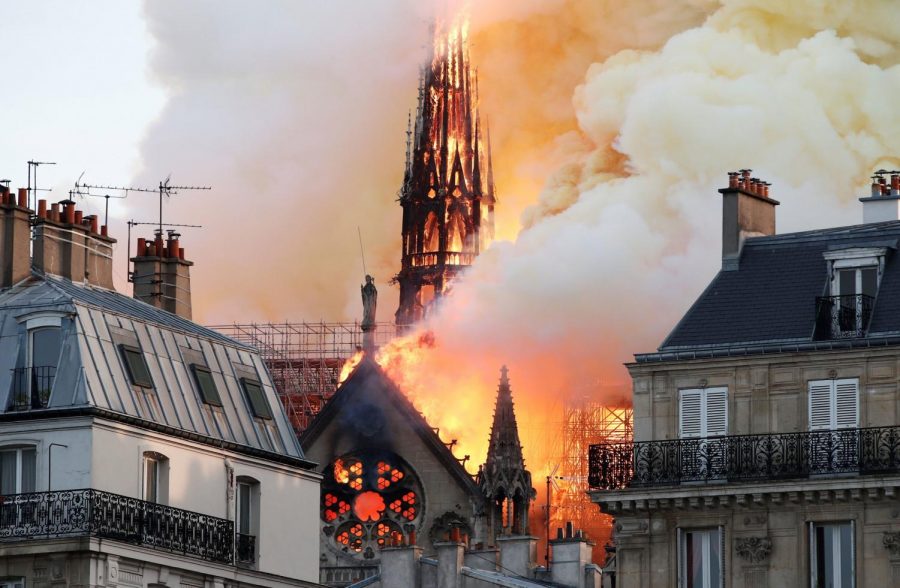 People from all across the world were shocked to learn that the beautiful Notre Dame tragically caught on fire on Monday April 15, burning away much of the 856-year old church. Notre Dame is a famous landmark in Paris, a treasure trove of history, and an important symbol to the Catholic Faith. Though optimists have noted that Notre Dame can be rebuilt, the extensive history behind the diminished bricks cannot be replaced. The heartbreaking fire will live on in infamy, as the French and people worldwide mourn the loss of an important monument.

Notre Dame’s rich history began centuries ago in 1163, when construction began on what was to be the crown jewel of gothic architecture. Its creation took nearly 200 years, and the grand project was completed in 1345. The church was named Notre Dame, meaning “our lady”. Notre Dame is considered a masterpiece of gothic architecture, but its legacy goes beyond its stunningly crafted walls. A plethora of historical events took place within Notre Dame. Notably, in 1431, King Henry VI of England was crowned King in Notre Dame. Four centuries later, in 1804, the crowning of the famous Napoleon Bonaparte occurred. However, the most renowned event in Notre Dame revolves around French heroine Joan of Arc. Joan of Arc was a poor French girl, but what she lacked in money, she made up for in courage and wit. Her talents helped lead the French to victories in battles with the English. Shortly after, however, Joan of Arc was accused by Burundians of heresy and consequently burned at the stake. On July 7, 1456, in honor of all of her accomplishments, Joan of Arc was declared innocent and a martyr. In 1909, Joan of Arc was beautified in Notre Dame cathedral, honoring France’s most famous heroines and landmark. Notre Dame also housed artifacts of immense age and value, including the tunic of St. Louis and the crown of thorns, which was believed to be worn by Jesus Christ during the crucifixion. The cathedral bursts with history, which made it all the more tragic when all of its admirers witnessed it burst into flames just days ago.

The cause of fire that ravaged Notre Dame remains mysterious. It is heavily speculated that the incident was accidental, and not a terrorist attack. The general consensus is that the fire was related in some way to the ongoing construction occurring at Notre Dame. Reconstruction and refurbishment were intended to freshen up the cathedral and keep it in prime condition, but it appears that these good intentions had catastrophic consequences. Researchers’ current theory is that an electrical short circuit, but further investigating is needed to accurately proclaim the true cause of the fire. Regardless of the reason behind the fire, Notre Dame’s partial collapse will live on infamy.

When footage of the fire first surfaced, spectators presumed the worst. The general thought was that Notre Dame was going to burn to the ground and nearly 900 years of history would be reduced to smoke and ash. A video of the iconic spire of Notre Dame brutally collapsing in the engulfing flames did not inspire confidence. Within the spire, century old relics had been stored, and they endured a horrifying fate. Several priceless relics of St. Denis and St. Genevieve crashed to the ground with the spire, and the contents of the spire have sadly been lost forever.  This, combined with the long duration of the fire, spanning over half of a day, brought about a bitter wave of pessimism concerning the cathedral. While the loss of the spire was tragic, several relics and structures of Notre Dame have been reported as being saved. The Great Organ, a grand instrument with 8,000 pipes, managed to escape the fire unscathed, preserving one of the world’s oldest and most famous instruments. Likewise, the tunic of St. Louis, has reportedly been rescued, meaning that a tunic once worn by King Louis IV remains intact. The cross, altar, and even some of the pews inside the church managed to survive the devastating fire, despite some of the debris and chaos surrounding them. On the outside of the church, a sliver of good luck may have saved some of Notre Dame’s beautiful statues. The rooftop statues were removed only a week ago as part of the renovations that Notre Dame was undergoing. If they had not been removed, they certainly would have suffered the same destruction as the spire. The stunning glass windows, most notably the beloved rose windows, appear to mainly be intact. However, their true status will be unknown until more art experts are able to inspect them. One object whose status is known and applauded is that of crown of the thorns. Jean-Marc Fournier, chaplain of the Paris Fire Department, risked his life saving the artifact. The crown of thorns is among Notre Dame’s greatest beauties, and Fournier’s valiant rescue mission is one of the few feel good stories to emerge from this tragedy.

France has vowed to rebuild Notre Dame in the most authentic way possible. The public support has been overwhelmingly positive. Notre Dame is a massive symbol of Paris, and it is also a major draw for tourists. The project has already collected over an impressive 900 million euro. Every penny will be needed to rebuild this fallen monument. It is expected that the project will take decades to complete, but if it can accomplish even half of Notre Dame’s beauty, it will have been a success.

The world lost one of its greatest treasures in Notre Dame. Though the videos circling showing the slow burn of the destruction engulfing the cathedral were truly sickening to watch, new evidence coming into light shows the resilience of Notre Dame. The church’s structure remains shockingly intact compared to the expectations given the large scale of the fire, and several of the precious relics in Notre Dame have been spared. The public feared Notre Dame would burn to the ground, but the 856-year-old cathedral refused to go down easy. However, the fire was undoubtedly a tragedy, and the history within the bricks of Notre Dame has been tarnished. Though Notre Dame’s legacy will live on, it is a depressing thought that the church that survived countless battles, weather scares, and two World Wars fell prey to a renovation induced fire. Notre dame deserved so much better than what it endured this week, but all the world can do is support the effort to rebuild what was tragically lost and remember the beauty of a monument that exuded history and grace.