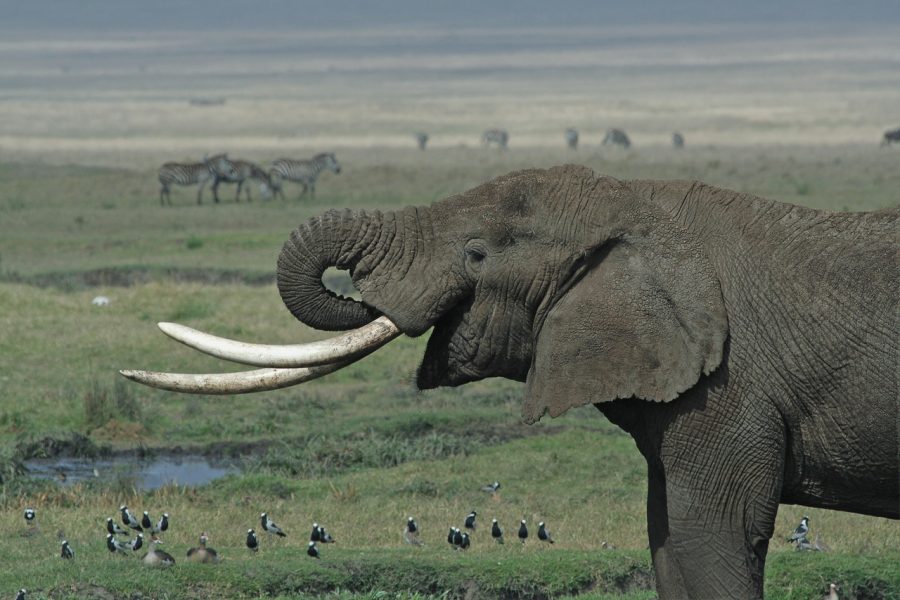 The population of elephants has been in decrease since 1979. Seeking wealth from the lucrative ivory located in the tusks, elephants have become prey to poachers. The number of elephants butchered depends on the demand of ivory at a certain time. From 1989 to 1999 the demand for the ivory was very low, due to the awareness of the illegal activity. Although after this brief time of rest, China experienced an economic boom which again created new markets for ivory. These new markets devastated the elephant population. From 2010 to 2012 the grand total of death was estimated at 100,000 elephants. As Central Elephant numbers dwindled, the poachers relocated to the savannas of East Africa. Even protected sanctuaries were not safe from the outside threats.

Considering this decrease in population, the Convention of International Trade in Endangered Species banned, in 1989, the global ivory trade and declared the African Elephant as an endangered species. Placing elephants under The Endangered Species Act, governments have the obligation to prevent them from being killed or harmed, protect the habitats essential to the elephant’s survival, and to create plans to restore healthy populations in the wild. The goal of this act was also to decrease the market for ivory worldwide and stop the poachers in Africa. The countries, like Zimbabwe and Mozambique stated that they would continue the ivory trade due to the benefits for the economy. Furthermore, the United States and the EU announced that they would cease buying ivory, but they would still export the resource. Although these countries continued to participate in the ivory trade, this act created a huge stir when the European Union fully shut down internal trade of ivory in 2018.

The UK was the largest legal ivory exporter from 2010-2015; although, in March 2018, the UK banned the internal trade of raw or newly-craved ivory. The hope was to protect the remaining elephants from being killed to allow for the public to obtain frivolous manufactured goods, such as piano keys, decorative nick-knacks, and billiard balls. The United Kingdom’s goal was to lead by example and to encourage other influential countries to do the same. The EU is doing more for the elephants than just banning the export of ivory. During the Botswana Summit, they announced €1.5 million of funding for a trans-frontier wildlife law enforcement program whose goal is to cut poaching across Angola, Botswana, Namibia, Zambia and Zimbabwe by half within three years.

What prompted this act of banning the internal trade of in the European Union?

Recently, illegal ivory was found in ten different European countries. Avaaz, a campaigning group, tested ivory using carbon dating. Carbon dating includes using the isotopes of carbon-14 and carbon-12 to determine the age of organic material. 1/5 of the material tested was conceived from elephants killed after 1990. This is illegal according to the 1989 world ivory trade ban. This evidence proves without a doubt that illegal ivory is being sold across the European Union.  Current laws’ goals are to not allow new ivory making its way on to the market; however, the trade of ancient, although restricted, is still allowed. Which out carbon dating, there is no way for a person to know if they are buying illegal or legal ivory. These laws allow for a market of this resource. The market is riddled with ivory from both old and newly killed elephants. To change this epidemic, the UK has passed one of the toughest ivory legislations in the European Union.

Other countries are also taking precautions to avoid the selling of illegal ivory. Certain African countries have been burning stock-piles of ivory seized by poachers publicly. The goal of the burning is to stop it from coming onto markets and fueling the international trade. If there is an ivory market, poachers will continue to butcher elephants to receive the lucrative rewards from the tusks. Hong Kong and China, who is one of the biggest outposts for the illegal international trade, has added more restrictions on the ivory trade.

In the wild, there are only around 600,000 African Elephants, only 1% of the original number ever estimated, and only 35,000 Asian Elephants. Change must happen in this trade quickly, or both the Asian and African Elephants will move from the endangered animal list onto the extinct list. The ivory trade allows for poachers to have a market to sell illegal goods and to create a drive to continue butchering elephants for the lucrative reward for their carcasses.