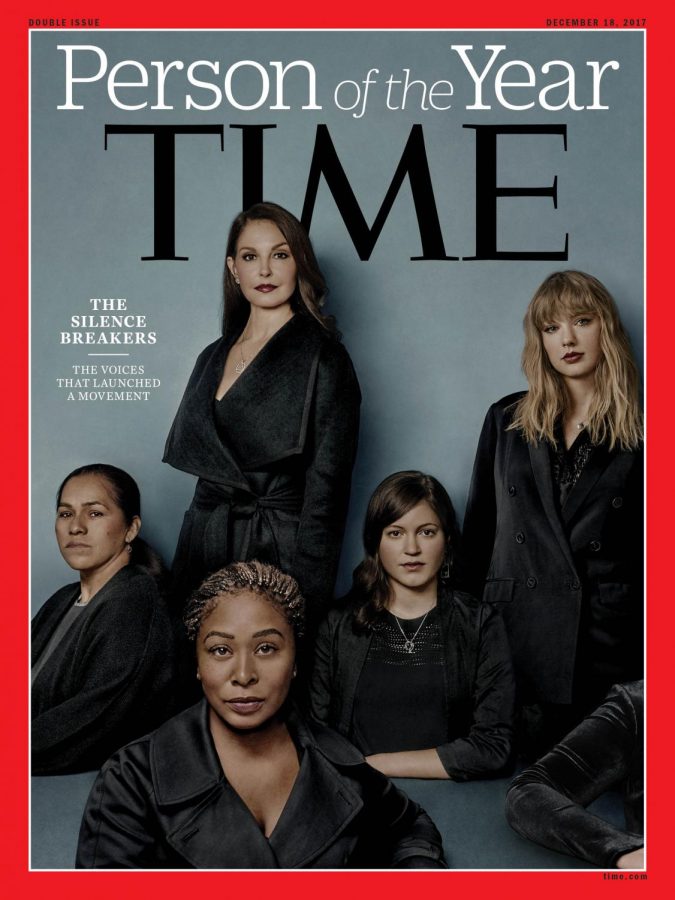 Time magazine is one of the most venerable magazines of America, who’s ground breaking 1932 entrance into American homes and workplaces has forever shaped the face of American media. Besides being the first weekly-news magazine in the United-States, Time has ultimately become known for its annual Person of the Year award. President Trump received the impressive honor of being named Time’s Person of the Year in 2016, with runner ups including political opposite Hillary Clinton and the queen her-self, Beyoncé Knowles. Conversely, Time magazine has chosen a powerful and highly prominent “person” as their 2017 honoree.

Time magazine, in a felicitous choice, has selected #MeToo as their Person of the Year for 2017. #MeToo, the empowering twitter hashtag which originated from activist Tarana Burke’s powerful phrase, “Me Too”, was popularized by actress Alyssa Milano on October 15, 2017. It has since snow-balled into a means for survivors of sexual assault and harassment to share their stories and experiences on the social media platform.

The social media campaign itself was brought to life in the wake of several accusations against renowned film producer, Harvey Weinstein in October of 2017. “I think that when people perpetrate against you, you are the one that feels the shame. You think that it’s just you,” says Katherine Kendall, who spoke out against Weinstein. The New York Times soon published an article outing Weinstein and sharing the stories of the group of survivors. From there, a plethora of women have gone public with their experiences and have successfully outed the accused men in power. Major names in Hollywood include famous House of Cards star, Kevin Spacey, and ABC News anchor Matt Lauer. Many other powerful men in politics and dining have also been accused for sexual assault.

“I already feel like I’m silently holding hands with the other women that have been through this,” admits Katherine Kendall, “and there’s a great power in that.” The #MeToo movement has swept the nation and united thousands of survivors; it has given women a much-needed platform to share their experiences with sexual assault, and feel safe and respected whilst doing it. On the cover of their Person of the Year issue, which was released on December 18th 2017, Time has labelled these brave survivors as “The Silence Breakers.”

As 2017 comes to a much-needed end, and the new year rolls in at full speed, the #MeToo movement has a rebirth. At the 2018 Golden Globes in Los Angeles, Oprah Winfrey made an empowering speech in which she advised women everywhere that the time to act out against sexism and discrimination is now. “I want all the girls watching to know a new day is on the horizon,” told Oprah. “And when that new day finally dawns, it will be because of a lot of magnificent women, many of whom are right here in this room tonight, and some pretty phenomenal men, fighting hard to make sure they are the leaders to take us to the time where nobody has to say ‘me too’ again.”

#MeToo has evolved from a simple saying that went undetected in the swarms of Hollywood, to a universal outlet for women everywhere to share their personal encounters with sexual assault. The hashtag has taken down contemptible men in power, and those hiding their appalling acts in the spot-light. With thousands of survivors fueling this mighty movement and empowering women across America, it’s no surprise that #MeToo was named Time’s Person of the Year.