Are there negative effects to social media? 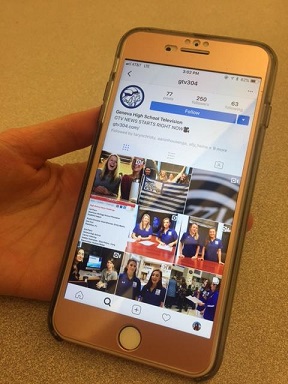 Social Media is addictive. In fact, The Washington Post states that “teens are spending more than one-third of their days using media” (Tsukayama, Hayley). This has become a huge part of our world today, and many feel as if they can’t function without it. And there is a reason for their obsession- social media is a fun way to connect with the world. However, it is not all good. Here are three negative effects of social media.

Although social media is fun, there are definitely a lot of problems that can and will come from frequent use of it. The first negative effect of social media and simply electronic devices in general is that they can cause problems with your eyes. As stated by “Tiny Screens Can Cause Big Vision Problems”, “Normally, we blink about 15 times per minute, but this rate decreases by half when we are staring at our smartphone. As we squint to read these miniature screens, our facial, neck and shoulder muscles tighten, eyes become fatigued and vision can be blurred or strained”. The website continues to say that this can cause dry eye, muscle cramps, headaches, and even permanent vision problems. These effects can be bad for your health and is a valid reason for reduced use of social media.

Another important problem created by these apps has to do with communication skills. Today, teens are usually in their rooms looking at social media instead of hanging out in person. This may not seem very bad, but according to Rachel Ehmke, “…what they were doing was experimenting, trying out skills, and succeeding and failing in tons of tiny real-time interactions that kids today are missing out on”. Because teens are mostly communicating online, they have a harder time talking to someone face-to-face. These kids lose the ability to read a person’s facial expressions and interpret an opinion from someone’s voice because they are so busy typing instead of looking and listening. This will impact many teens’ abilites to effectively communicate in the workplace, as well as during job interviews. They will have a harder time getting jobs because they cannot speak about their ideas, at least not in person. Because of this, it is obvious why many have decided to quit social media.

The last and most important effect of social media is depression. Although it may seem unlikely, using social media too frequently can cause “2.7 times the likelihood of depression” (Chowdhry, Amit). In fact, according to a study done, “more than a quarter of the participants were classified as having ‘high’ indicators of depression”. But why would such an innocent, fun activity cause depression? The answer is simple- envy. People on social media generally only post about the good things going on in their lives, and they do it so regularly that others are fooled into thinking that this person has a perfect life. This stimulates negative ideas about one’s own situation. They begin to subconsciously believe that they are alone in their problems, which quickly leads to depression. If more people decided to use social media less frequently, then maybe we would be able to reduce depression in many individuals and maybe even suicides in our society today.

Due to the outcome of these facts, it is easy to see how defective Social Media proves to be. It is still a great communication resource; however, it is also something that should be used in moderation. If teens can be encouraged to put down their phones more often, then there might be a chance of improving the positive effects of these amazing resources- and destroying all of the negative ones.